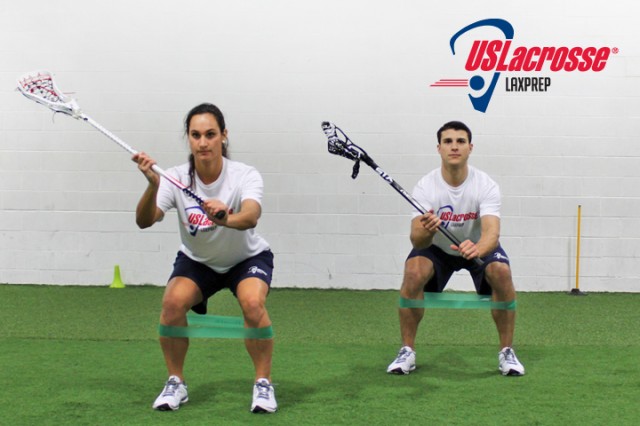 As studies have indicated, ACL (anterior cruciate ligament) tears and lower extremity injuries are the primary cause of missed game and practice time in both boys’ and girls’ lacrosse. But US Lacrosse is hoping to change that in the near future.

Through a partnership with Medstar Sports Medicine, US Lacrosse has developed a research-based warm-up and exercise program, called LaxPrep, that can be used to help reduce an athlete’s risk of lower extremity injury.

LaxPrep utilizes a three-phase warm-up routine designed to develop core strength, balance and proper landing techniques, all of which are instrumental in lowering the risk of knee injury. A commitment of just 15 minutes, 2-3 times per week, can help make athletes stronger and keep them healthier.

One study (Hewett, Johnson, 2010) found that neuromuscular training by female athletes in high-risk landing and cutting sports like soccer, basketball, and lacrosse had reductions of up to 82% in relative ACL injury risk.

"This is the culmination of several years of development and research in partnership with MedStar Sports Medicine, and we believe it's a first-of-its-kind program to the sport of lacrosse," said Erin Smith, director of education and training at US Lacrosse.

An online training tutorial for LaxPrep is available to assist coaches, athletic trainers, and other team leaders in learning the program and how to implement the exercises with players. The entire online training session takes 45-60 minutes, and is free to US Lacrosse members. The course fee for non-members is $50.

One of the keys in the LaxPrep routine is the use of dynamic warm-up exercises before each of the three program phases. It is recommended that each athlete utilize a therapy resistance band to assist in the exercises. The bands are available for purchase online.

“Inherent in the LaxPrep program is increased athlete performance,” said Bruce Griffin, director of health and sport safety at US Lacrosse. “Not only is the athlete at less risk of injury, but they will also perform better on the field.”

That performance enhancement is already being noticed by Mark Mozier, who coaches the varsity girls’ team at St. Vincent Pallotti in Maryland. Last fall, Mozier incorporated LaxPrep training with his high school team as well as the players in the elite girls’ training club he runs in Annapolis.

“I’m noticing girls who have been doing the exercises with the bands who are quicker and faster,” Mozier said. “I’m definitely convinced.”

Having seen too many ACL injuries among female players through the years, Mozier is excited that a program in now available that can serve as an intervention.

“I’ve seen how catastrophic an ACL injury can be, and unfortunately, it happens much too often,” Mozier said. “We wanted to do something to stop losing players to this injury.”

Spotty Robins, varsity boys’ coach at Woodberry Forest (Va.) School, is making a similar commitment to the long-term health of his players by implementing LaxPrep. His personal experience influenced his decision.

“I tore an ACL and I know firsthand the physical and emotional challenges of reconstructive surgery followed by months of rehabilitation,” Robins said. “Lower extremity injury prevention is incredibly important. I am more than happy to spend a few minutes a couple days a week to decrease the likelihood one of my players will suffer an injury.”

The input from medical experts who serve on the US Lacrosse Sport Science and Safety Committee was instrumental in the development of the program.

“From start to finish, the collaborative work of many people contributed to the successful development and deployment of LaxPrep,” Griffin said. “That joint effort between staff, volunteers and experts is part of the unique nature of our organization.”

"We're proud to say that with the help of our donors and the support of membership dollars, US Lacrosse is committed to developing these kinds of injury prevention programs and education,” Smith said.

Coaches interested in learning more about LaxPrep or beginning the online tutorial should click the button below.